In a quiet region in southern Mozambique, one community’s fight to reclaim their stolen land has led to a more communal way of life, and an approach to farming that embodies agroecology, working in harmony with nature and peoples’ rights.

Peasants from across Namaacha have been farming on subsistence plots in the village of Cocomela for many years. But in 2015, the Municipal Council of Namaacha Village evicted the community from the land on which they depend for their survival. The Municipality claimed the land was ‘underused’, and could therefore be utilised for the construction of weekend homes for the wealthy from the capital Maputo, 80km away.

In 2017, after ongoing efforts to lobby the Municipality to return their land, the Association of Natives, Residents, and Friends of Namaacha (ANRAN) decided they needed help.

The Association turned to Justiça Ambiental (JA!)/Friends of the Earth Mozambique, which was already fighting many cases of land-grabbing across the country. But the Namaacha case was the first accusation JA! had seen made directly at a municipality.

Gizela Zunguze (JA!) talking to members of the Association of Natives, Residents and Friends of Namaacha on the land that was grabbed and recovered

“Land-grabbing here in Mozambique is very problematic and it has been getting worse. Our current political situation in Mozambique facilitates this, the corruption of our government representatives, and the companies who do not respect the rights of the communities,”

For the next two years, JA! worked with the community to fight the eviction. Together, JA! and the Association secured a meeting with the Ombudsman to demand the Municipality return their land.

Amélia Carolina Muianga was at that meeting.

Women on the frontlines make change

A peasant woman in her 80s, Amélia was at the forefront of Namaacha’s land battle. 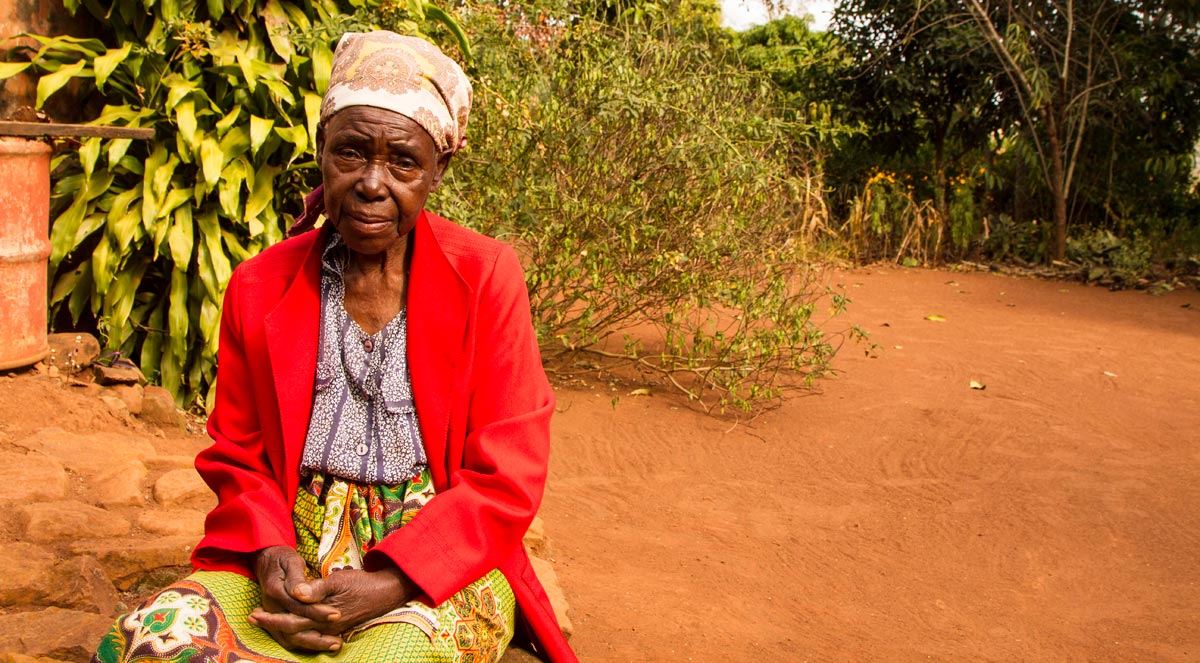 Amélia told her story of the hardships she endured after being evicted from the land she had farmed since she was a young woman. The Ombudsman demanded the Municipality return the land, and stated that the farmers had full rights over it.

“In these struggles of land conflict and decision-making, women’s involvement is very important,” says Gizela. “Because of traditional and cultural issues, in Mozambique or in Africa in general, women are not involved. Justiça Ambiental has been promoting the involvement of women, because the woman is the one who deals with the land. It is not possible to have development without the involvement of women.”

“The ones who lost their land continued to work because of me, because I was there to give support to the women of the Association.”

Herculano Agostinho Macaringue’s grandmother began farming in Namaacha in 1962, but she was forced to leave her home 10 years later because a nearby dam was at risk of bursting. Now, Herculano has custody of the land.

Herculano Macaringue on his plot, where he plans to start growing coffee

He and his neighbours in the Association have embarked upon a collective farming project, based on agroecology. As they experiment with which plants thrive in their local ecosystem, they share their new-found knowledge with others.

“We do not use agrochemicals, we work with organic compost of grass or animal droppings. We know that agrochemicals make the land poor, we do not want to have poor land, we always want to have our land rich, which is why we use other types of nutrients,” Herculano says.

“Here I am producing lettuce, a bit of cabbage, onion, there are also beans there, bananas, I have fruit, tangerines, I have lychee. I make a bit of sugar cane, as you see I have papayas. The mango trees are already old, at some point I will have to cut and replace them with new ones, to bring a new dynamic in things.”

ANRAN’s President, Rafael Paulo Langa, says the organisation wants to change those farming habits that are damaging to the environment.

“As the agricultural season is approaching, we will set the grass on fire, and it will destroy everything, all the plants and grass,” Rafael says.

“For the children, we are going to create rooms to teach them about why you cannot slash and burn, how important it is not to burn, and about simple and basic techniques – the name of the plants, how they reproduce after cutting, how to produce nurseries.”

Rafael Paulo Janga, President of the Association of Natives, Residents and Friends of Namaacha, on the plot set aside for a new agroecology project

As they continue to test the best species in their experimental fields, the community is thinking about its future, and how they can increase production so they can feed themselves, and develop biodiversity-friendly livelihoods.

Significantly, the Namaacha residents now know how important access to land and land security are for their ability to continue practicing agroecology.

“We learned from Justiça Ambiental how to defend our land, what must be done to secure and maintain the land, and reduce land conflicts, be it with the State or between us.”

“Among the many people here in the countryside, the ones who can do agriculture are the Boers [South Africans] and other domestic or foreign investors, but we didn’t know that we ourselves can work our land. Now, with the support of Justiça Ambiental, they will see that we can do that too.” 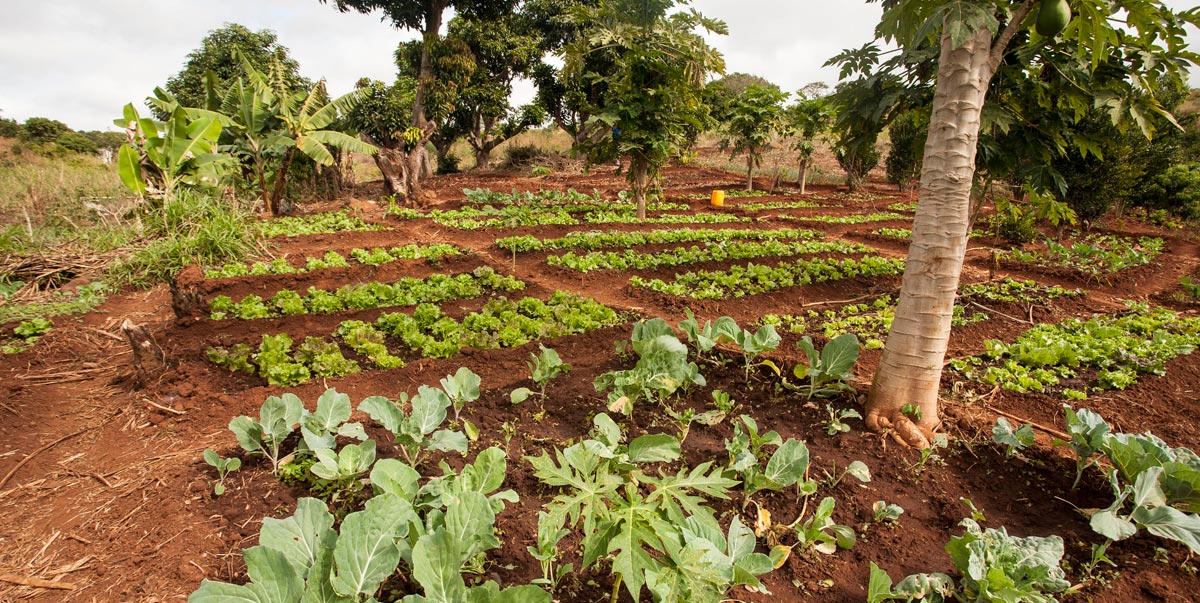 Battles still to fight, but on the road to success

Many villagers alleged some members of the previous council were corrupt, and the Association was allowed to run as a civil society candidate in the October 2018 elections. While the Association didn’t win a seat, they say they have a good relationship with the new council. The paperwork is still being finalised, but the Municipality has agreed to allow the Association one hectare of land for native crop and tree cultivation.

The suspension of the urban expansion project in Cocomela was a victory, but the affected farmers continue to live in uncertainty, as their land has not officially been returned by the Municipality. In the time that the Namaacha community was separated from their farming land, it was divided by cement borders into 130 allotments of 900m2. They are still forced to farm around these demarcations. JA! is working to have the borders removed and to secure a meeting to mark the official return of the land.

“Individually it is not easy to do this, but collectively, as an association, it is possible.”

Gizela (JA!) and members of the Association of Natives, Residents and Friends of Namaacha, holding sugar cane on Herculano’s plot

Through their struggle, the Namaacha residents have become more committed to demanding their rights, and protecting the environment.

“When communities are organised, it is much easier for them to fight for their rights. It has been a very difficult task because there is a lot of intimidation. But when the communities themselves know their rights, that the land belongs to them, and how important it is for them to contribute to the struggle, this helps a lot.”

JA! works on agroecology with communities across Maputo, Gaza and Zambezia provinces. They run courses on agroforestry, improved nutrition and environmental sustainability, and support peasant communities in their struggles to regain and maintain control over their land and livelihoods. According to JA!’s vision, agroecology and agroforestry are fundamental steps on the path to achieving food sovereignty. 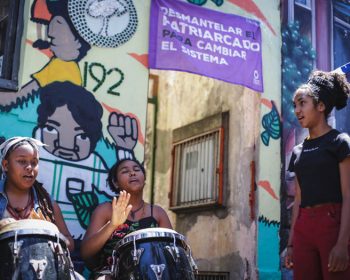 Fruits of Resistance in Brazil 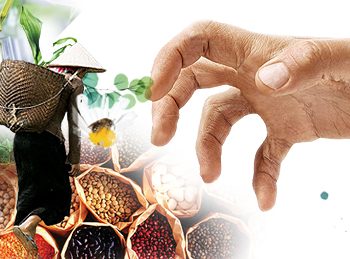 ‘Junk agroecology’: How corporations are co-opting peoples’ solutions to the food crisis 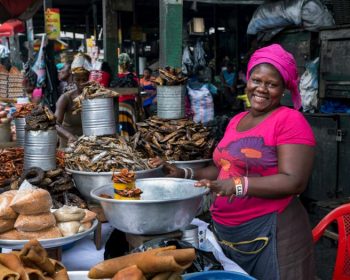